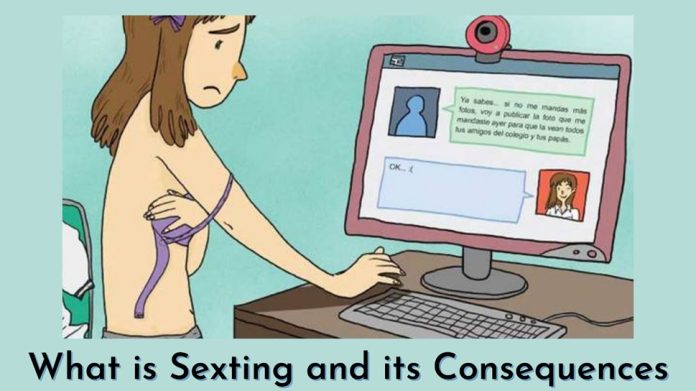 The practice of sexting is particularly widespread among adolescents who often do not know the potential risks associated with sending explicit personal content. According to what emerges from the data of Generazioni Connesse (a project promoted by the European Commission and coordinated by MIUR), 6% of children under the age of 14 would have sent intimate photos via private message. There is also talk of pre-adolescents, who hardly have a full awareness of the dangers that lurk behind the screen.

Any (non-consensual) sharing of sexually explicit content on messages , by the recipient of the messages represents the first danger when it comes to sexting. Furthermore, it should be emphasized that any sharing of content of this type belonging to underage users (even if shared by other minors) constitutes the crime of disseminating child pornography material.

Sometimes the notion that once the message is sent, there is no going back, seems to slip away. Thus, depending on the situation (and also on the relationship between the parties involved), doubts and fears may persist regarding the possibility of finding their photos or videos online or shared with third parties in the future. There are not a few cases in which a similar incident occurred many years after the practice of sexting, with often negative and dramatic consequences for those involved. This is the case, for example, of Chiara Fantoni, elected Miss Modena 2008 at the age of 18, but excluded from the “Miss Italy” contest due to the appearance on the net of scandalous photos, sent to her ex-boyfriend, of when she had only fifteen years. Chiara’s intimate photos were published without her consent three years later, that is precisely on the occasion of the young woman’s victory in the Modena competition.

In any case, it seems that the feeling of remorse is common to some of the individuals who practice sexting. According to a survey conducted on 352 US university students, this feeling often occurs immediately after pressing the submit button: 10% of the sample examined admits, in fact, having second thoughts or feeling remorse after sending explicit content to someone and the reasons are varied, but all think that is a good way to build a new relationship or to maintain the old one.

In some cases, the fear is that of retaliation from an ex-partner after a breakup of an engagement or divorce. In fact, the practice of sexting is often linked to so-called revenge porn, but also to cases of extortion (in English “sextorted”, which refers to the use of intimate photos or videos as a form of blackmail). In many cases there is also the perpetuation of cases of cyberbullying, in which users suffer psychological pressure from attackers who force them to send images or videos and lead them to enter a spiral of threats and coercion from which it is often difficult to escape…

Another much discussed aspect concerning the risks of sexting is that of early childhood sexualization due to the possible exposure, at a very early stage of the child’s development, to contents of a sexual and pornographic nature, without there being an adequate orientation. from parents.

Sexting could also lead to a potential negative impact on human relationships, giving rise to a sexuality detached from physicality and the real and corporeal presence of the other and consequently potentially distorted and deprived of the emotional dimension. In cases where the contact between individuals were to become exclusively virtual, the risk could be the cancellation of the human component of relationships and a purely virtual involvement that could favor an objectification and commodification of the body

What Kind of Apartment Would be The Perfect One In the...