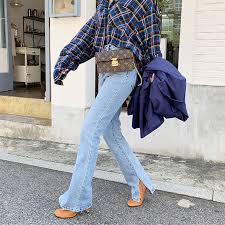 When and how were the original and first ever jeans made in the world?

Jeans are the type of trouser of pants which are made from the material called denim or Dungaree. Whenever someone mentions jeans, they are talking about the plain blue ones, which are the most common. The first-ever jeans were made by Loeb Strauss, who was a German businessman and owned Levi’s Company. He had got an idea, and then he partnered up with Jacob W Davis to create the first jeans. He needed Davis because of the copper button that he made on the side of the jeans.

This button would make sure that the jeans and their pockets will stay in one place. Also, these buttons are made from copper and are tightly sewed into the fabric, which has a good hold. These first-ever jeans were made for those people who used to work in the mines called the miners. Loeb thought that he could make affordable and durable pants for these workers to buy and wear.

He was successful in doing so, and it got so famous that it was included in the uniform of these workers. These kinds of trousers were tough, and they could not be torn very easily. The jeans are originally made from denim, but the new style also includes cotton inside them. The first-ever jeans were made and released in the market in the year 1871.

After, which this trend had died and then in the year 1950 it was born again in the Hollywood films. You can see movies like the Wild One and the Rebel without a cause to see these jeans come again. Then they had created different jeans like ripped jeans, split jeans, full-legged jeans, etc.

What are Split Hem Jeans, and how did they get famous in the market in the 21st century?

Split Hem jeans are those jeans that have a split made in the sides of the jeans near the legs. These jeans were first made and got popular in the year 1950, after which they had gone away. Then in the 20th century, a model named Victoria Beckham wore these jeans and made them famous again.

She had flaunted these jeans in one of the shoes called the SS19. Due to which there are new designs as well as many purchases made for these split Hem jeans. These are known to be a great addition to your wardrobe and can help you look comfortable and fresh. You can wear them on any occasion you want, either for shopping, dinner, date or movie, etc. You can make this a good look by wearing a neck or a slouchy tee to make it look good on yourself.